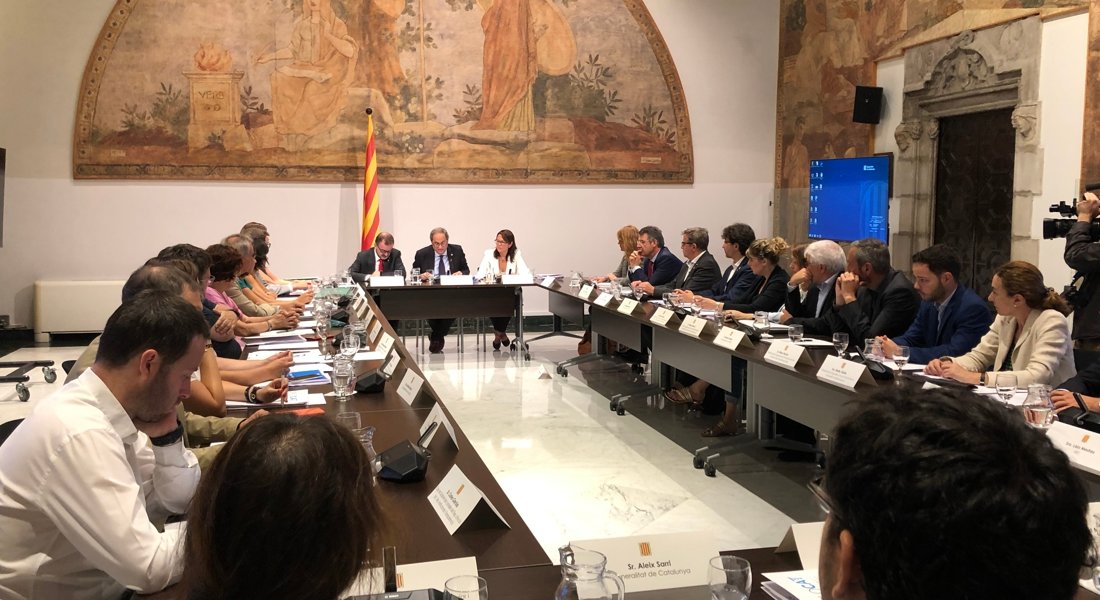 This morning the Plenary Session of the Public Diplomacy Council of Catalonia (DIPLOCAT) was held in the Sala Torres Garcia of the Palau de la Generalitat. The session was chaired by the President of the Generalitat, Quim Torra, and was also attended by the Catalan Minister of External Action, Institutional Relations and Transparency, Alfred Bosch. The 2019-2022 Strategic Plan and the 2019 Work Plan, presented by the secretary general of DIPLOCAT, Laura Foraster, were also approved during the session.

Quim Torra highlighted the great work carried out by DIPLOCAT to increase awareness of Catalonia abroad: "Public diplomacy is essential to continue to make this country a benchmark throughout Europe and the world. When it is open and without intermediaries, this country shines even brighter." For his part, Alfred Bosch stated that "the real Catalonia is a Catalonia that has the will to be and to do; to be free, fair, prosperous and equitable". He added: "Today we confirm that DIPLOCAT continues its work of international promotion, which is indispensable and has the full support of the Generalitat of Catalonia, but it also needs the efforts of the other administrations and civil society." Bosch argued for a vision of Catalonia "that has the will to reach out and welcome everything we can learn from the world," and he stressed that "public diplomacy is a basic tool in this country".

As Laura Foraster explained, "with the motto 'International Dialogue - We connect. We reach out. We develop capacity', the entity marks the three areas of work through which it will deploy the classic tools of public diplomacy: exchange of best international practices, visitor programmes, organization of international seminars and seminars, training, and interaction with the foreign media".

The strategic plan is the result of joint work with the members of the consortium, who contributed ideas and participated in the drafting of the plan. With the desire to decentralize the action and give voice to the whole territory, this new stage also includes a specific plan for the internationalization of the local world. The plan establishes strategic thematic areas that are considered priorities and identified as global debates, such as Agenda 2030, the new economy, human movements and social cohesion, in addition to areas in which Catalonia is or wants to be a benchmark, such as entrepreneurship, sustainable tourism, the social economy, and scientific and technological innovation.

The 2019 Work Plan includes an international seminar on The Role of Public Diplomacy in the Digital Era; the International Visitor Programme to allow journalists to gain personal experience of Saint George's Day; the Seminar for a Sustainable Food System; the 1st International Congress on Vocational Training in Catalonia; and the scholarship programme for Postgraduate Studies in International Relations, which this year reaches its 36th edition.

The Public Diplomacy Council of Catalonia (DIPLOCAT) was created in 2012 as a public-private consortium. It connects Catalonia to the world and fosters activities that promote the image of the country abroad, creating links and relationships of trust with the citizens and institutions of other countries. In addition, DIPLOCAT encourages civil society and Catalan entities to become involved and contribute to the main global challenges and debates. It fosters their ability to be major players on the international stage in order to establish durable bridges of dialogue over time, with the aim of listening and being heard.

DIPLOCAT is the successor to the Patronat Catalunya Món and the earlier Patronat Català Pro Europa, an entity created in 1982 that was a pioneer in Catalan relations with the EU. The consortial and pluralistic nature of the entity has been maintained over the years and under its different names.

The consortium is made up of 38 members, including public institutions, businesses, entities of the social, trade union and sports sectors, universities, business schools and educational institutions.