Catalonia's Day of Books and Roses seen through foreign eyes 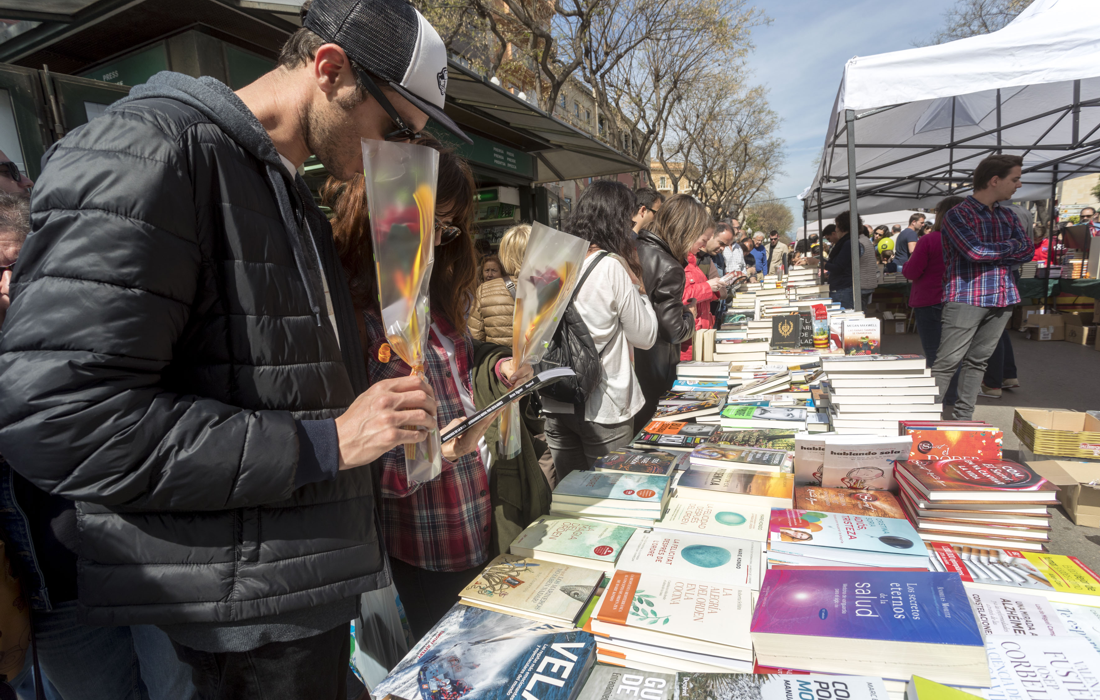 On the occasion of Sant Jordi's Day of Books and Roses, DIPLOCAT has organized a virtual debate with two foregin journalists and booksellers. All of them had recently spent a 23 April in Catalonia, invited by DIPLOCAT, and they were asked to share their memories and experience. As the moderator Matthew Tree recalled, the pandemic situation has logically also changed this celebration a lot. The digital debate "What makes Catalonia's Day of Books and Roses so special?" aimed to reproduce and explain to a foreign audience the unique and unrepeatable atmosphere of Sant Jordi in Catalonia.

Laura Foraster, Secretary General of DIPLOCAT, presented the event and thanked all for their participation and interest. She explained that this day is one of the most special days for Catalans and that despite not being a holiday, everyone finds a moment to go out and buy roses and books for the people they love. She also referred to the #BooksAndRoses campaign, which has been promoting the Day around the world for years.

Matthew Tree, a London-born writer based in Catalonia for decades and a member of DIPLOCAT's Advisory Board, began the debate by proposing several questions to the four speakers. First, he asked them to talk about their impressions of the time they lived the Day of Boks and Roses in first person. He also encouraged them to talk about how the pandemic has affected the world of books and reading habits in their respective countries.

Dorothee Junck, who has an independent bookstore in the German city of Cologne, explained that it was great to be in Barcelona on 23 April and see the streets full of people buying books and roses. She also commented that while the situation in Germany varies depending on the land, not enough campaigns or recommendations are being made to help the book industry. Finally, although large companies make it difficult to sell in local bookstores, she has been quite optimistic about the "renaissance of reading" in Germany.

Slovenian journalist Spela Novak has started by saying, half jokingly, that when she went to Barcelona for Sant Jordi she had the impression that everyone was writing and publishing books. She also highlighted the atmosphere of happiness in the streets, invaded by books and roses. Regarding the current situation in Slovenia, she stressed that there is a certain feeling of confusion due to the continuous changes in the rules. In addition, there are paradoxes such as that in the same street you can buy video games but not books. As for the habit of reading, she says it's hard to know, because it depends a lot on your environment and buying a book doesn't guarantee that you will read or enjoy it.

For the Portuguese bookseller José Pinho, owner of the beautiful bookstore Ler devagar in Lisbon, it was a great surprise to see so many people on the streets of Barcelona for Sant Jordi, as in Portugal the Day of Books is also celebrated, but all activities are indoors. He also explained that for him the situation is quite dramatic because for a long time they have had to close bookstores and books could only be bought in supermarkets and gas stations. In Portugal, reading hàbits are quite similar to that of Catalonia and although during the pandemic it has increased a little, buying a book does not mean that it is read. What he considers a serious problem is that in Portugal publishing companies can sell books and apply large discounts, without respecting the fixed price rule.

For Edita Slezáková, a journalist from the Hungarian minority in Slovakia and president of the MIDAS newspapers association, spending a Sant Jordi Day in Barcelona was a great experience and she really enjoyed seeing so many people on the streets of the city filled with positive energy. Because she belongs to a national minority, she argues that culture is a key element. In Slovakia, during the first months, bookstores remained closed and even supermarkets were forbidden to sell anything other than food. The reopening of bookstores is very recent and she fears that many will end up closing. Her feeling is that, before the arrival of the pandemic, the habit of reading varied according to the seasons. Now, with the rise of platforms like Netflix, the need to read a good book has been somewhat lost, especially among the younger ones. Students are also tired of reading and virtual classes.