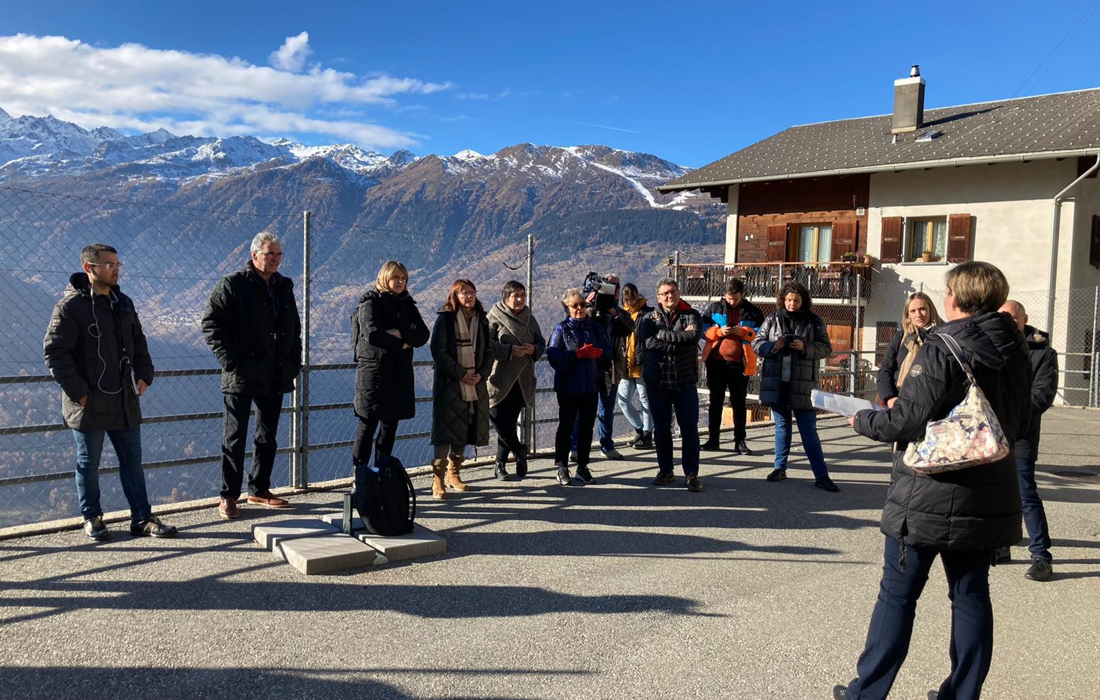 It is organised jointly with the Delegation of the Government of Catalonia to Switzerland and serves to exchange experiences and good practices in the fight against depopulation.

A delegation made up of nine mayors and elected officials from mountain regions and small, sparsely populated villages in Catalonia is visiting the Swiss side of the Valais this week to learn first-hand about various innovation and territorial rebalancing projects in the area. The trip, which stems from an initiative of DIPLOCAT's local working group, marks the reinstatement of the organisation's exchange programmes in a face-to-face format. The Delegation of the Government of Catalonia to Switzerland is collaborating in the organisation and development of the programme and the delegate Gabriel Boichat will participate in the different activities.

According to Laura Foraster i Lloret, the the Secretary General of DIPLOCAT who is accompanying the delegation, "the aim of the trip is to create links between Catalonia and the Valais region by facilitating the exchange of experiences and good practices in the field of territorial policies and the development of sparsely populated areas". The Catalan representatives will have the opportunity to learn about the mechanisms that small and medium-sized towns in the *Valais have put in place in recent years to keep their citizens from leaving or even to attract new ones.

The participants in the trip are:

The Catalan territory has very uneven population densities, with very densely populated cities and geographical areas, such as Barcelona and its metropolitan area, as well as areas with very low population densities. Catalonia is depopulating in certain specific areas and, at the same time, it is ageing. DIPLOCAT's local working group thought it would be interesting to visit a Swiss region with very similar challenges, which has been working for several years to develop innovative solutions.

The Covid-19 pandemic has facilitated new methods of deploying telecommunications networks in the region and the possibility of teleworking from anywhere. However, the creation of opportunities arising from the new context of the pandemic and the promotion of telecommunications should not be the only focus for future work. Among the elements related to the fight against depopulation are the environmental sustainability of leisure activities, extraction of natural resources or deployment of parks for the production of renewable energies, lack of housing supply to rural areas, difficulty of access to health and education services or few opportunities for socialisation.

The following topics are to be discussed during this visit:

This trip represents the conclusion of a series of activities that DIPLOCAT has organised on the theme of depopulation and territorial rebalancing, which began with two telematic conferences on challenges and opportunities for mountain regions in Europe (May 2021) and on the deployment of 5G technology in rural areas (July 2021).