The covid-19 crisis is transforming the role of cities 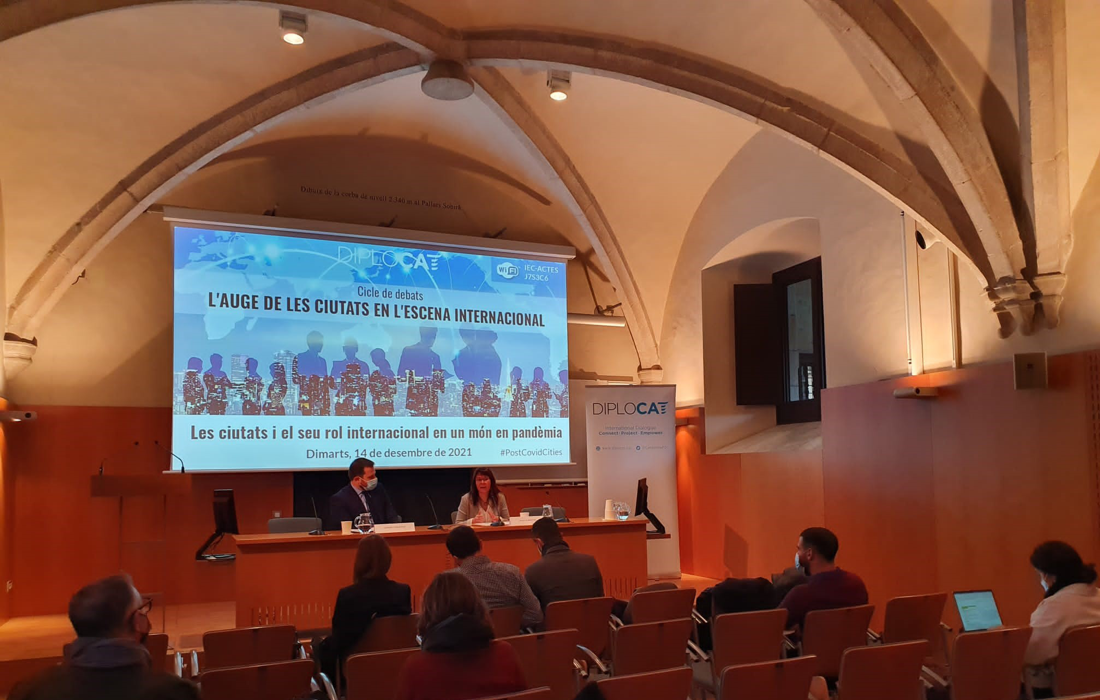 DIPLOCAT began today a series on the rise of cities in the international arena with the debate "Cities and their new international role in a pandemic world". The conference was held in Barcelona and could also be followed online.

The Secretary of Foreign Affairs of the Catalan Government, Gerard Figueras, opened the cycle by stressing the need for dialogue among cities when facing global challenges. He assured that his Department is fully aware of the importance of cities in the international context and actively supports the external projection of Catalonia's municipal entities. He was accompanied by the Secretary General of DIPLOCAT, Laura Foraster i Lloret, who began by reflecting on the population density in urban areas and their logical claim for more autonomy at international level. She also explained that in the covid-19 crisis, cities often took over from states when the latter collapsed.

Full video (in Catalan and English):

This first event was structured around two round tables. City leadership in post-covid recovery was the topic of the first one. Moderated by Hannah Abdullah, a senior researcher at CIDOB's Global Cities program, speakers included Saskia Sassen, sociologist, Robert S. Lynd Professor of Sociology at Columbia University and member of its Committee on Global Thought; Paul Costello, Program Manager of GMF Cities at the German Marshall Fund of the United States; and Felip Roca, Director of International Relations at Barcelona's City Council.

Saskia Sassen told about the often invisible complexities posed by post-covid reality. She introduced the concept of predatory formations dressed in Wall Street suits to refer to the new challenges of big cities, which are the object of desire of big multinationals and the financial sector. This trend has multiple negative consequences and causes disconnection between large cities and their inhabitants. Felip Roca referred to the lessons learnt by cities due to the pandemic. He believes that Barcelona reacted positively with two lines of action: explaining to the world what was being done locally and creating a team that analyzes good practices from other cities around the world. Paul Costello spoke about cities and democracy, based on the premise that in Europe the local level is the one that inspires most trust in citizens. Creating communities of citizens is the best way to show how a good democracy can work. One of the biggest and most worrying issues being inequality, there are tools at the local level that help overcome them, such as active citizen participation or the right to vote for everyone living in the country.

The second table presented various practical international initiatives, with the participation of Joan Chicón, head of the European and International Relations Service of Terrassa City Council; Katharina Freter, Director of Europe and International at Nantes Metropole (France); and Stefanie Miller, Deputy Head of EU Affairs and Global Sustainability at Mannheim City Council (Germany). This second panel was moderated by Mariona Tomàs, Professor of Political Science at the University of Barcelona.

Joan Chicón explained that in Terrassa they have a master plan for internationalization with five priority areas: universities, audiovisual, culture, health and sports. He spoke of public strategies to combat the pandemic and said that since Terrassa is one of UNESCO's creative cities, during the pandemic they launched a cinema project aimed at young people to show how they were doing during their confinement. Katharina Freter spoke about her experience in Nantes and specifically referred to the concern for food provision during confinement. Among the measures launched by the city were short-term ones, such as financial aid for disadvantaged families, but also longer-term ones, such as the creation of urban gardens, which also promote civic cohesion. Finally, Stefanie Miller explained that the city of Mannheim suffered especially from the effects of the pandemic and how the local government sought answers at different levels, from cultural to economic, and how they want to take advantage of the adopted changes also in the future. She also referred to the importance of international cooperation and gave examples of activities carried out with the twin cities of Mannheim.

The aim of this cycle, which will continue during the first semester of next year, is to analyze why and how cities act in international environments, what dynamics are created, what networks of cooperation derive from them and how its impact can be measured. Currently, more than half of the world's population lives in urban areas, and according to a 2018 United Nations study it is estimated that by 2050 the figure will reach two-thirds. The same study points out that in the coming years, 600 cities will account for about 65% of global GDP growth. Today's cities are the main centers of production, the crucible of social change and the focus of scientific and technological innovation.

With this explosion in the economic power of cities, it is not surprising that they are also taking on a growing role in areas of foreign policy. This phenomenon has become even more evident with the pandemic caused by covid-19. Cities are becoming increasingly involved in major decisions and global issues that directly affect their citizens, and are positioning themselves as an alternative to states, leading to new actions in the international arena.