In 2021, Catalonia was mentioned online internationally 1.307 times every day 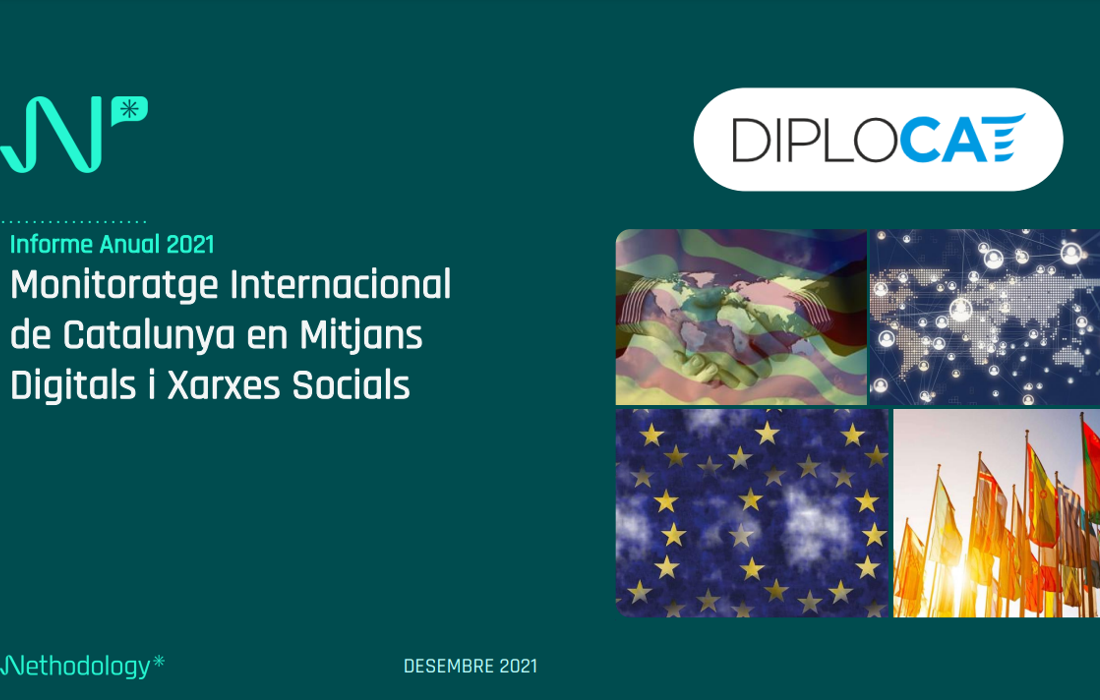 A study by DIPLOCAT compiles mentions on Twitter, in digital media and on blogs and forums

Since 2019 and on the instructions of its Plenary Session, DIPLOCAT has been monitoring Catalonia's presence in online conversations in order to find out who is talking about it and where, when and how they are doing it. "This is a really handy tool when it comes to mapping out strategies for international outreach," says Laura Foraster, secretary general of DIPLOCAT. "We combine it with others we have in place such as monitoring the international media and our survey about the international perception of Catalonia", she adds.

In 2021, from a purely quantitative point of view, the number of mentions during the first eleven months of the year (the period covered by the study), came to 477.155. Considering that the number in 2020 was 793,605, the decrease is almost 40%. Mentions are mainly from Twitter (93%), but also digital media, blogs and forums around the world, except for Catalonia and Spain. This equates to 1.307 mentions per day and 54 mentions per hour. The conversation about Catalonia reached 188 countries worldwide and a potential audience of 201 million people.

As for the themes discussed, the three hot topics of 2021 were politics (59%), sports (19%) and the covid-19 pandemic (9%), followed by culture, education, science, tourism and gastronomy.

In the political arena, the talks focus on issues related to independence, relations between Catalonia and Spain and the elections, and have a more negative tone in Spanish-speaking countries (USA, Mexico and Argentina).

FC Barcelona captures most of the sporting conversation, followed by major sporting events such as the Moto Grand Prix and the Cycling Tour of Catalonia, whic are mostly followed by the French, Swiss, Flemish and Dutch.

As for covid-19, the main language is French and not English due to the proximity of France to Catalonia, which is an important element when it comes to travel or contagion. Mentions of curfews and nightclub closures dominate, but there is also a high presence of political issues related to the holding of the February elections in the midst of the pandemic.

The countries with the highest absolute volume of conversation about Catalonia are the USA (22%), France (14%), the United Kingdom (11%), Mexico (9%) and Argentina (7%). If we weigh the figures according to the population of each country, the five countries with the highest percentage are France (17%), Argentina (14%), the United Kingdom (13%), Switzerland (10%) and the Netherlands (7% ).

The study also unpacks the general tone of the mentions which may be positive, neutral or negative. This is what is known as digital reputation. In this case, the majority of mentions were neutral (57%), followed by negative (26%) and positive (17%). The bulk of the negative mentions were about covid-19 and the handling of the pandemic, the riots following the detention of rapper Pablo Hasel and far-right Vox making it to the Catalan Parliament after the February election.

The study additionally includes a comparison of Catalonia with other sub-state entities such as Scotland, Wales, Quebec, Flanders and the Basque Country. However, these data may not paint a true picture of the actual situation because while in the case of Catalonia all conversations in Spanish were excluded as they were seen as basically coming from Spain, in the case of Scotland and Wales, for example, only conversations geolocated in the UK were ruled out. The study shows that on a comparative basis Scotland gets 59% of the mentions, Wales 21%, Quebec 14%, Flanders 3%, Catalonia 2% and the Basque Country 1%.

Although the study covers the whole world, specific analyses were also undertaken for the following countries in their most widely spoken language or languages: the USA, Mexico, Argentina, Brazil, the United Kingdom, France, Germany, Italy, the Netherlands, Sweden, Switzerland, Croatia, Slovenia, Latvia and Estonia.

You will find here the complete study (in Catalan) and the country-specific factsheets, which were carried out by market research firm Nethodology.