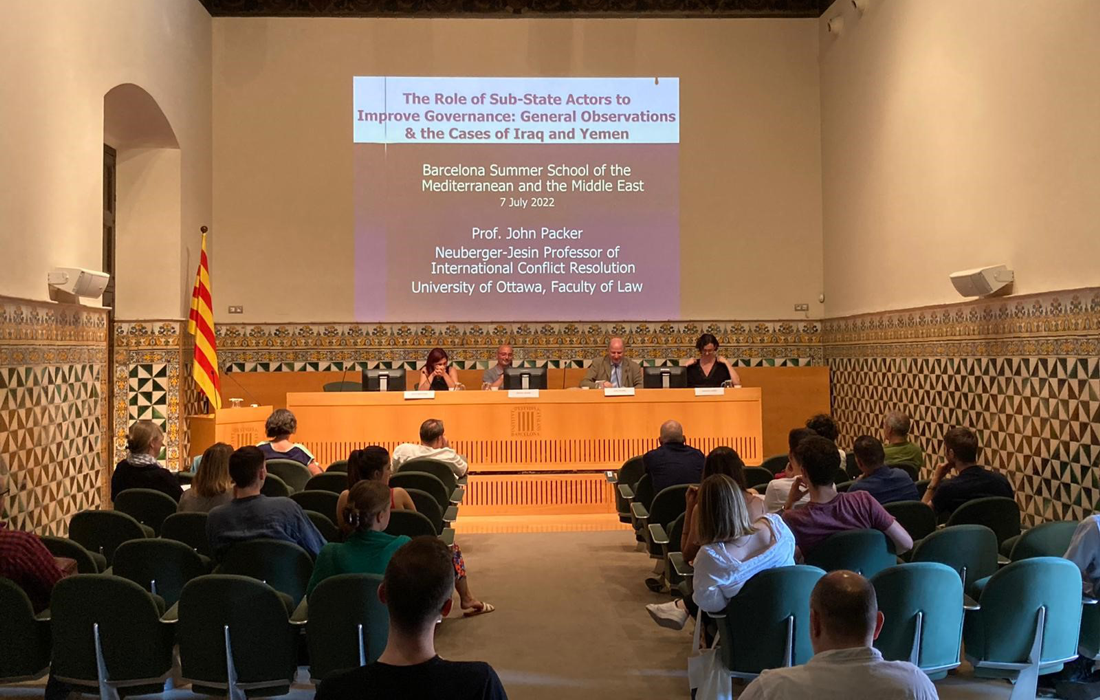 This was one of the conclusions reached during the round-table discussion "The Rise of Sub-state Actors in International Relations" during the Barcelona Summer School of the Mediterranean and Middle East.

This evening DIPLOCAT held a round table discussion on the subject: "The rise of sub-state actors in international relations: towards a better governance. The cases of the Mediterranean and the Middle East", as part of the programme of the Barcelona Summer School of the Mediterranean and Middle East, organised by the Barcelona Institute of International Studies (IBEI) and Blanquerna-Ramon Llull University.

The event was inaugurated by Victòria Alsina, the Minister for Foreign Action and Open Government of the Government of Catalonia; Míriam Díez, the Assistant Dean of the Faculty of Communication and International Relations at Blanquerna-Ramon Llull University; and Elisabet Moragas, the Senior Project Manager of DIPLOCAT, representing the entity's Secretary-General. In her address, Elisabet Moragas remarked that "the role of sub-state actors in the construction of better governance that can take into account the particular needs or interests of local citizens in a global world is vital" when it comes to taking on the challenges faced at a specific, local level. There is a consequent need for "joint action at all levels of governance." For her part, Míriam Díez emphasised that "the rule-based international liberal order, despite being imperfect, is one of the few frameworks that allows sub-state actors like the government of Catalonia, or similar entities in the Mediterranean or Middle East, to participate effectively in international affairs." Finally, the Minister stated that "the recognition of diversity, the consolidation of the areas of competence of sub-state governments and their establishment of effective instruments of governance to participate in international relations, are some of the most important challenges that the External Action of Catalonia faces."

This was followed by a round table discussion presided over by Mariona Lloret, the associate professor and academic coordinator of the International Relations degree course at the Ramon Llull University; with the participation of John Packer, the Neuberger-Jesin Professor of International Conflict Resolution at the University of Ottawa; Manuel Duran, of the research group on International Policy at the University of Antwerp; and Silvia Quattrini, North Africa Manager of the Minority Rights Group.

In his address, John Packer observed that the capacity of central governments to act as the sole actors in international relations has been diminished by the entry into the field of other entities. From his viewpoint, many other entities can bring citizens well-being and security, and this was very clearly seen in the response to the Covid pandemic. Increasingly, local and regional participants are becoming the first distributors of responses and policies to citizens at a local level that nevertheless have repercussions and an impact on a global level. With regard to countries such as Yemen or Iraq, John Packer emphasised the influence of actors that control the territories but do not really exercise power over them.

Following this, Manuel Duran focused his address on a description of the different levels of governance within the Spanish, Italian and French governmental systems, concluding that "whether by complementing or by competing with the 'Mediterranean policy' of their central governments, French, Italian and Spanish sub-state entities are changing the nature of diplomacy in their specific region from a centralised to a multi-level exercise."

Finally, Silvia Quattrini spoke of the cases of entities that are working to make heard at an international level the voices of the different ethnic and linguistic minorities in the countries of North Africa. In this regard, she emphasised that the task of these entities is not focused on obtaining legal recognition as countries but on the recognition of their social, linguistic and cultural rights, and described the example of the Amazigh culture whose zone of influence extends over various countries in Africa.

This seminar came to an end with a debate between the various speakers and a round of questions from the general public.