The role of industry in the recovery of European competitiveness 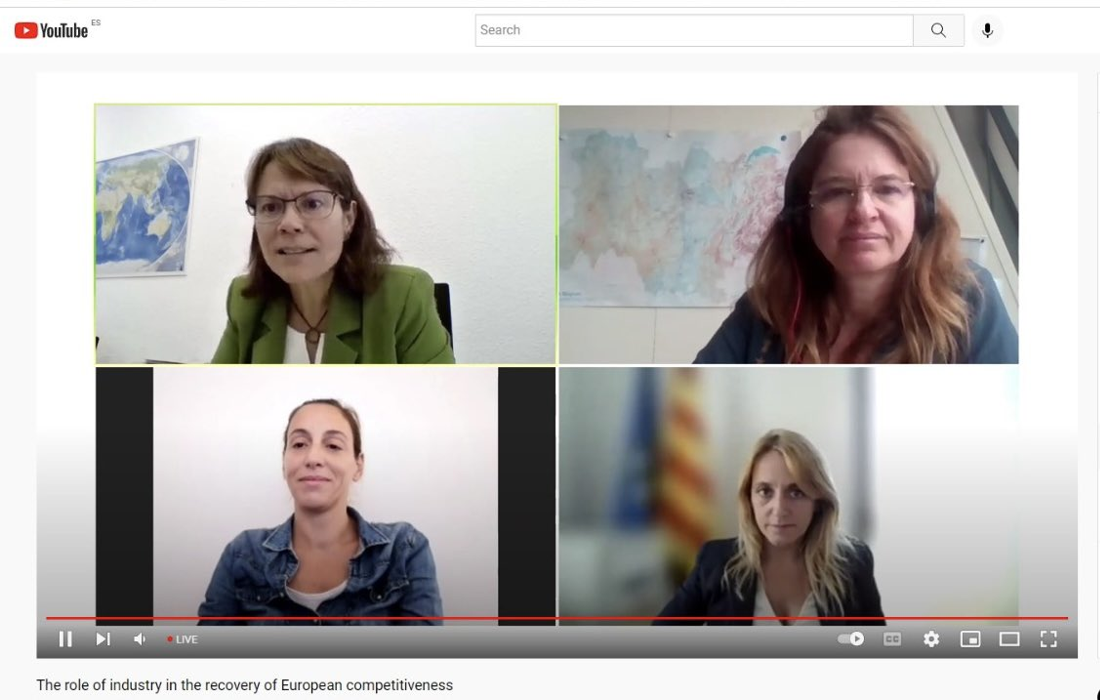 A digital talk organized by DIPLOCAT pursues the exchange of good practices among international, regional and local actors

On 15 September 2022, DIPLOCAT hosted an online debate on "The role of industry in the recovery of European competitiveness". The goal of this digital talk was the promotion and exchange of good practices among international, regional and local actors. On this occasion, the debate was proposed by a member of DIPLOCAT's business, social, and trade union working group.

The debate focused on how the closure of borders and the blocking of the supply chain for essential products, caused by Covid-19 first and now the war in Ukraine, has disrupted both the EU's and global economies. As a result, the whole notion of industry is under transformation today.

Laura Foraster i Lloret, Secretary General of DIPLOCAT and moderator of the session, welcomed the audience and thanked the speakers for their participation in the debate. She then made a brief introduction to the role of DIPLOCAT and emphasized how these debates are a very enriching experience to share knowledge and successful practices across international actors on the strategies to follow. In view of this new industrial landscape, Foraster said that the question guiding the debate would be how Europe can take advantage of these much-needed changes.

Clotilde Barbot, head of the "Partenariat et Dispositifs" Department at the French region of Auvergne-Rhône-Alpes, talking about the opportunities presented by reshoring and why companies should relocate back to Europe,  first made a brief introduction on how a region like Auvergne-Rhône-Alpes presents its attractiveness for companies to relocate there. Barbot explained that Auvergne-Rhône-Alpes is characterized by its dynamism, its large urban and industrial spaces and its engineering-focused centers. Moreover, the adoption of a new industrial strategy for the post-Covid-19 period of 2022-2028, similar to the plans adopted by other public administrations worldwide, has become an essential measure. In fact, the plan offers a toolkit that provides companies, especially those belonging to  excellence sectors such as the healthcare industry, hydrogen and microelectronics, with the necessary technical and economic assistance needed for relocation.

Natalia Mas Guix, Director General for Industry of the Government of Catalonia, first emphasized the similarities and close relationship between Catalonia and Auvergne-Rhône-Alpes, as both are members of the network Four Motors for Europe. Mas also stated that similar to the aforementioned region, Catalonia has recently approved the National Pact for Industry for the period 2022-2025, approved by a broad consensus of economic and social agents. This plan is intended to meet three main objectives: to achieve a more efficient economy, to make the industrial pact a tool to accelerate the double digital and green transition and, finally, to regain the strategic industrial autonomy, which had been lost to most other developing countries. On the other hand, and answering to the same question, Mas asserted that on some occasions reshoring has been confused with protectionism. Instead, she defended that reshoring does not mean bringing everything back to your country and limiting global presence. Reshoring pretends to achieve greater resilience, diversification, and economic proximity in order to consolidate global competitiveness and, very importantly, to achieve a more equitable society.

It should be stressed that in this context of relocation, the Next Generation Funds have and will still play a fundamental role in achieving this global strategy. Thus, the results in Catalonia have been positive, and in fact, the role of industry in the economy has grown for the first time in 40 years. In the same way, large projects have materialized, for example, in the field of electric batteries and battery components, as well as in the field of semiconductors, both of which are vital for today's industrial processes. However, it is worth mentioning that in order for this industrial strategy to be properly implemented and to achieve the expected results, it is necessary that territories have the right conditions in terms of workings standards, education, and especially infrastructure. On this last point, Natàlia Mas pointed out that infrastructures need to be improved and the construction of the Mediterranean railway corredor needs to be completed, as it is a key factor for the industrial recovery of Catalonia and Europe.

Karina Azar, economic analyst at Foment del Treball Nacional, asked whether reshoring could have negative consequences to consumers, such as the increase in costs and the lack of innovation. She stated how the concept is not new, but to this date it has been the subject of debate by specialists from all over the world. Even if reshoring may have some negative consequences, as the other speakers pointed out, this strategy would imply gains in efficiency, resilience, and security for both consumers and firms, and a good implementation would surely outweigh the costs. Moreover, Azar pointed out some points  about reshoring to be taken into account. Firstly, there is the risk of exposure of certain raw materials and products to economic shocks, which could make Catalonia externally dependent. Secondly, not all sectors should be reshored and other strategies can be considered by diversifying global value chains and improving preparedness by asserting potential threats to potential activities. In this sense, in certain cases a reshoring strategy can be a necessary step toward boosting industrial activity and attracting direct foreign investment at home.

In the final part of the debate, the speed of change in today's world was highlighted, with unexpected events such as the Covid-19 pandemic and Russia's invasion of Ukraine adding uncertainty to it. Looking to the future, the need for greater adaptability, cooperation and foresight to better face the challenges of the future was stated. In the same way, a positive trend seems to have emerged, which is the continuous dialogue between actors, especially between companies, administrations and social entities, since the global challenges can only be overcome through working together.