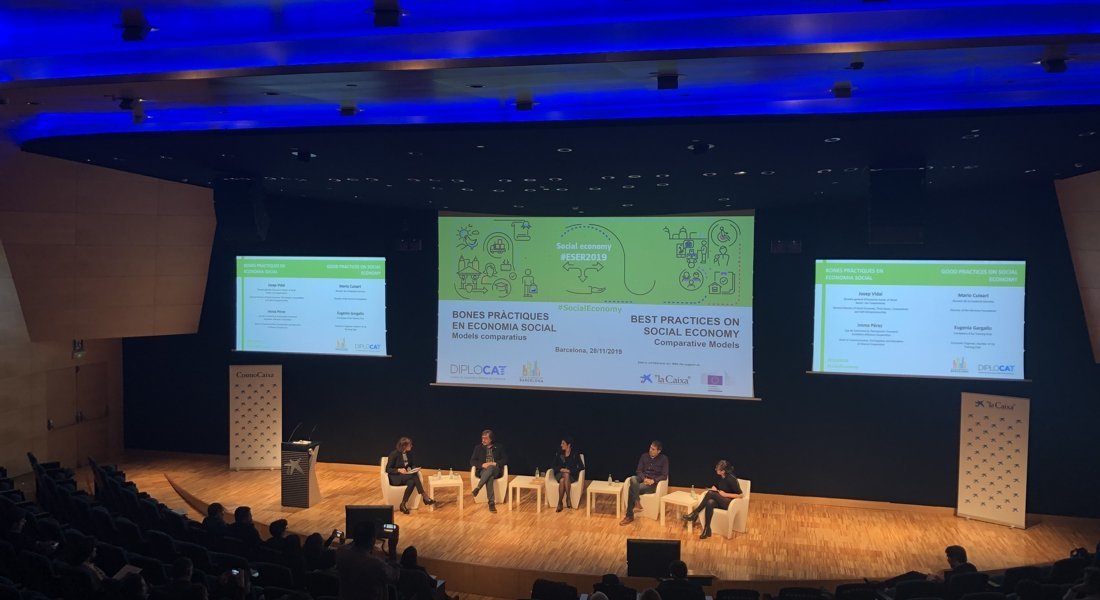 The Public Diplomacy Council of Catalonia (Diplocat) and Social Business City Barcelona organised a workshop on comparative models of the social economy on Thursday 28 November in the CosmoCaixa auditorium in the Catalan capital. The event was held in cooperation with "la Caixa" and the European Commission.

The event, led and moderated by the journalist Eva Torrents (Dívik), started off with the words of welcome of the various representatives of the organisations taking part. Valentí Farràs, Director of CosmoCaixa, thanked the organisers for having brought the debate to the headquarters of his organisation. In turn, Jaume Oller, President of Social Business City Barcelona, highlighted that "there is another way of running an economy" and that his organisation seeks to help bring closer the reality and the good practices of the social economy by mentoring entrepreneurs in this sector. Lastly, Laura Foraster, Secretary General of Diplocat, stressed that one of the tasks of Diplocat is "to connect with the international public to analyse and exchange good practices and models of excellence, and at the same time to project the assets and values of Catalonia" and, on this occasion, "to provide first-hand knowledge of the Catalan model of economic and business diplomacy with a commitment to bring about social change and meet the social and cultural needs of society."

The aim of the event was to offer an overview of the social economy and social enterprise, and to give voice to some of their models. The keynote speech was given by the expert in the social economy and Emeritus Professor at London South Bank University Alex Murdock. Professor Murdock emphasised that there is no unanimity about the definition of the social economy; neither its name nor the concept as such. In his exposé, however, he pointed to a number of elements that in one way or another can help to define different models of social enterprise. These include the social objective of the firm, the more participatory and democratic organisational model, and the fact that these firms focus on people rather than capital. He added that over and above the discussion as to whether we are talking about for-profit or non-profit companies, "in the social economy it's not about profit; it's about what you do with the profit."

Another speaker at the event, Karel Vanderpoorten, Social Economy Policy Officer at the European Commission, described several cases of social enterprises across Europe and the world. Among them, he singled out the initiative of the Catalan cooperative Som Mobilitat, which fosters electric car sharing. He went on to present the initiatives that are being carried out by the European Commission to encourage this economic model and set forth data to illustrate their impact and volume in Europe, assuring that this sector includes more than 2.8 million organisations in the European Union.

To finish, a round table was held on good practices in the social economy in Catalonia, with the participation of Josep Vidal, Director General for the Social Economy in the Generalitat of Catalonia, Imma Pérez, Communication and Participation Officer at Abacus Cooperativa, Mario Cuixart, Director of the Germina Foundation, and Eugenia Gargallo, founder and Director of Up Training Club. The actors from the business world stressed the importance of the social economy to generate a change in society but also to have an impact on the economy in general. Many of them underscored the flexibility of this type of company and its way of operating in "start-up mode", readapting constantly to customers' needs and mobilising resources through the application of a trial-and-error method.

All the participants in the round table coincided in the importance of the shared social goal for their enterprises, and at the same time called for a clear legal framework in which to develop their businesses, highlighting that the only legal construct that is clearly recognised as a social enterprise in this country is the cooperative. In this regard, they all agreed that the debate should not hinge on whether they are for-profit or non-profit companies but rather on what the profit is reinvested in and how, coinciding with Professor Murdock's stance. The dissenting voice on this point came from the representative of the public administration, who stated that this economic model is not built on capital, and therefore we should always be talking about non-profit enterprises.

The event, which formed part of the second edition of the European Social Economy Regions (ESER 2019), a European Commission initiative that seeks to establish an effective network of social economy stakeholders and organisations, served to spotlight how the various different legal and economic frameworks that exist in Europe affect the development and expansion of these business models.