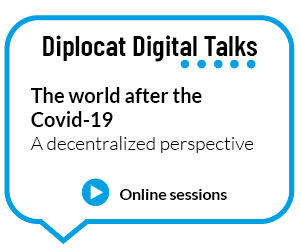 The Public Diplomacy Council of Catalonia (Diplocat) will hold a series of digital talks and debates to make up for the current impossibility of organizing face-to-face events. Named "Diplocat Digital Talks - The world after the Covid-19", the debates will have in common the fact of being in English, promoting the exchange of good practices and assuming a decentralizing perspective.

The first debate will be entitled "Centralization vs. Decentralization against COVID-19" and will take place on 25 June. In this case, the event will be organized jointly with the Center for Contemporary Studies (CETC) of the Catalan Government and the moderation will be chaired by political scientist Marc Sanjaume.

The following debates will address topics such as the role of local bodies in promoting new tourism models, the future of mass-assisted cultural and sporting events, and the new productive models of certain European regions.

The purpose of these debates will be, above all, to share knowledge and exchange good practices between sub-state entities on the strategies to be followed in the immediate future. Laura Foraster, Secretary General of Diplocat, explains that "Catalonia must push, as it has always done, towards a redefinition of the European framework that prioritises multilevel governance and gives more voice and prominence to the role of stateless nations, regions and cities".

The debates in this series are aimed at an international audience, specifically public and health policy analysts, experts in political and institutional communication, international relations specialists, students and journalists. The scheduled events will last approximately one hour and a half. Once the debate is over, it will be accessible through Diplocat's website.