The first Diplocat Digital Talk on 25 June will focus on the subject, in an event organised with Catalonia's Center for Contemporary Studies (CETC) 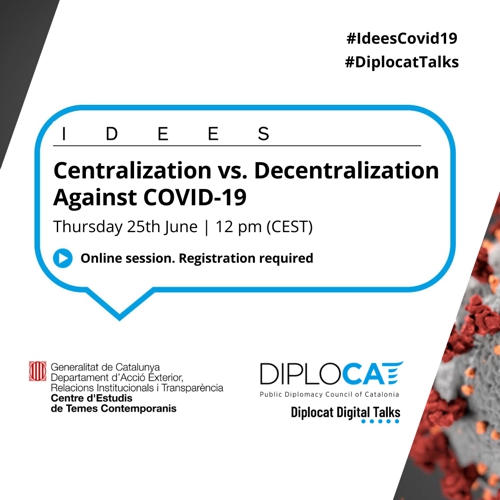 Once the COVID-19 pandemic begins to be under control in Catalonia and in most European countries, it is a good time to raise a debate on the strategies that different countries have adopted to deal with it and try to extract positive lessons for the future. This is the aim of the first debate of the Diplocat Digital Talks - The World After COVID-19 series, which will premiere on Thursday 25 June with the online debate "Centralization vs. Decentralization against COVID-19".

The event, which will be in English language and is co-organized by the Public Diplomacy Council of Catalonia (Diplocat) and the Center for Contemporary Studies (CETC) of the Catalan government, will include the following experts:

The debate will be chaired by political scientist and professor Marc Sanjaume and the Secretary for Foreign Action and European Union of the Catalan government, Eli Nebreda, will address the opening words. Participants will also be welcomed by Laura Foraster i Lloret, Diplocat's secretary general, and Pere Almeda, CETC and IDEES magazine director.

Throughout the hardest days and weeks of the COVID-19 pandemic, state, regional and sub-state governments, mainly in Europe and the United States, raised their voices. In the middle of the crisis, these actors have set their own profile in the face of the recommendations, statements and instructions of their respective central and federal governments, from the statements made by the New York and California governors, to the strategy followed by the Italian region of Veneto, through the special claims arising from the Balearic and Canary Islands, as well as the position of the Scottish government against the British executive or Catalonia against Madrid.

Hence, governments and sub-state entities have had an emerging engagement, regardless of the level of decentralization of their respective countries. Their involvement in the provision of assistance such as health or social services has put them at the forefront of the battle against COVID-19. However, no less important will be their immediate role, given that many of them have competences in economic, tourism and cultural dynamism.

The debates in this series are aimed at an international audience, specifically public and health policy analysts, experts in political and institutional communication, international relations specialists, students and journalists. The scheduled events will last approximately one hour and a half. Once the debate is over, it will be accessible through Diplocat's website.

The debate on 25 June will start at 12 noon and registration is needed to participate.