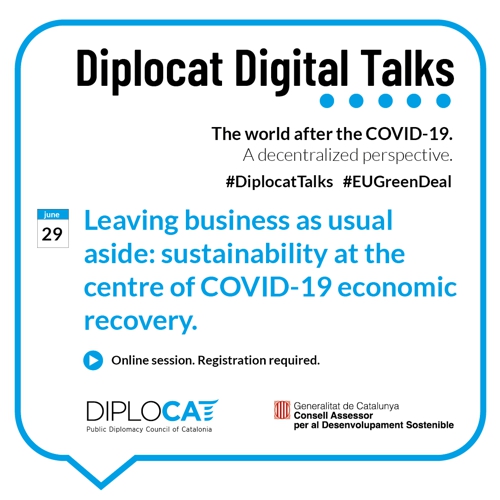 After talking about centralization and decentralization, the topic of the second debate in the Diplocat Digital Talks - The World After COVID-19 cycle will be the role of sustainability in the phase of economic recovery that is just beginning. The debate will take place on Monday 29 June and is organised jointly by the Public Diplomacy Council of Catalonia (Diplocat) and Catalonia's Advisory Council for Sustainable Development (CADS). The title is "Leaving business as usual aside: sustainability at the centre of COVID- 19 economic recovery".

The debate will include the following speakers:

Participants will be welcomed by Laura Foraster i Lloret, Secretary General of Diplocat, and Arnau Queralt, Director of the CADS, who will also chair the debate.

In March, in the midst of the COVID-19 health crisis, the European Commission presented its Circular Economy Action Plan, considered one of the main pillars of the European Green Deal. The plan aims to better manage resource consumption within the EU and reduce environmental pressure, on the basis that if everyone in the world consumed the same as an average European citizen, three planets would be needed to provide the necessary resources.

The Action Plan announces initiatives for the life cycle of products, from their design to manufacturing and subsequent consumption. According to data from the EU itself, the measures linked to the plan could allow an increase in European GDP by an additional 0.5% by 2030 and generate around 700,000 jobs.

The Action Plan was presented in the midst of an unexpected context, COVID-19, which has a strong impact on human lives and, at the same time, opens the door to a major economic and social crisis. In this context of short and medium term crisis, can the circular economy help drive a more resilient, more environmentally friendly and socially fair economic system? Will it be a driver of recovery from this crisis? Will circular economy projects be able to absorb the unemployment generated in the economy as a whole? After all, is COVID-19 an ally of the circular economy or will it lead towards the linear economic model? The debate on 29 June will try to provide answers to these and other questions.

The event will start at 10 am, will last approximately 90 minutes and you must register at the following link to participate: