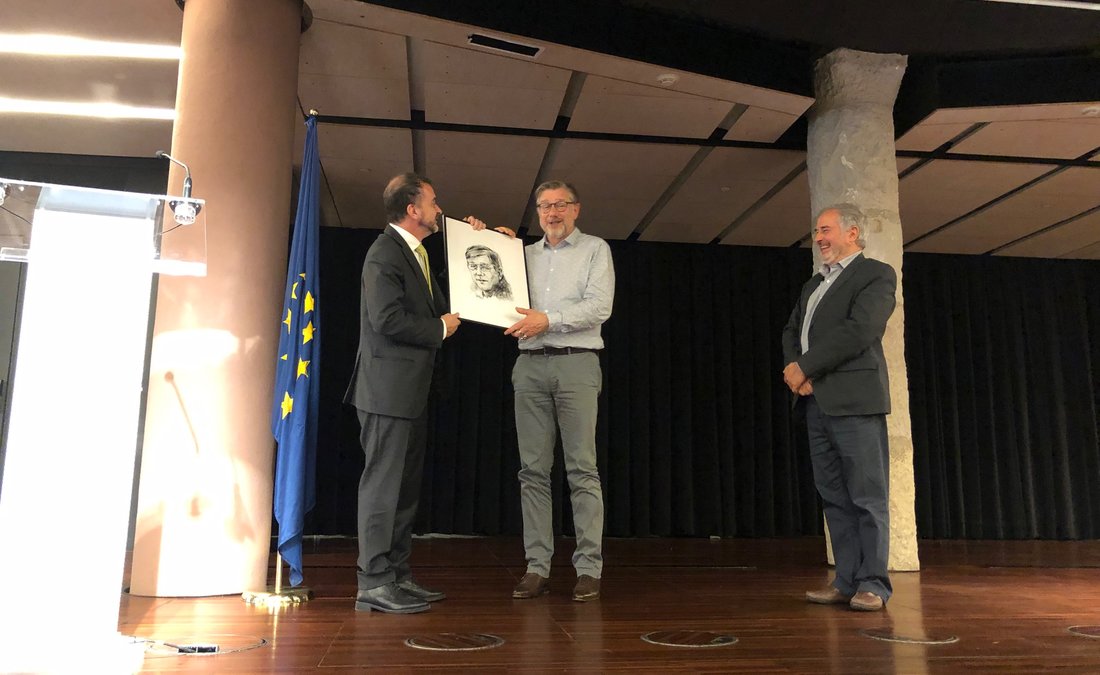 The Public Diplomacy Council of Catalonia (Diplocat) has been collaborating for years with the Ernest Udina Prize in the European Trajectory that is given every year by the Association of European Journalists of Catalonia (APEC). This year, the award has fallen to the French journalist Jean Quatremer, who has followed European news for the Libération newspaper for nearly 30 years in Brussels. The event took place this afternoon at the Auditorium of La Pedrera in Barcelona.

The jury has wanted to reward Quatremer for its extensive career covering information in European institutions and for being a critical journalist and with a didactic spirit. He also valued "professional independence, didactic spirit and constant adaptation", as well as "his journalistic investigations, of great relevance and strong importance to the European institutions." He also highlights his figure as a reference journalist in Brussels, a position that has been based on the publication of several books, the constant update of one of the first blogs on the Internet on European issues and the direction of television documentaries.

After receiving the prize, Jean Quatremer explained that "a journalist should not like it, it's because he does not like it". And he added: "I prefer to tell you, not that I love you. If you love me, it's a bad sign. " The winner also insisted that he is deeply committed to community construction because he hates war, and that is why Europe is a great idea. "But today this idea is in danger," warned Quatremer. And he said that the threat does not come from European citizens, who have shown in the last elections that they continue to believe, but from the states.

Quatremer also wanted to denounce the fact that there were no representatives from the European Commission or the European Parliament at the ceremony. The French journalist thinks that he annoys his critical spirit in general and that he has criticized how the Catalan process has been dealt with by the Spanish authorities and the government of Mariano Rajoy in particular. For Libération correspondent, this "only made the problem deepen and enlarging the conflict among peoples". The representatives of the European institutions have not liked the sculpture of the award to include a yellow bow and an inscription that says that voting is not a crime, according to Quatremer.

In charge of awarding the award was the Foreign Minister Alfred Bosch, who in his closing speech said that "the truth is brave and to be a good journalist like Quatremer, courage." The counselor also argued that "those who believe in Europe are the majority, and we are growing" and has claimed that more than pro-European citizens are talking about, "they want Europe to go further and be more peaceful, more prosperous and more democratic ".

The Association of European Journalists of Catalonia (APEC), the organizer of the award, emphasized that it is a "prize for critical Europeanism". Ramón Vilaró, president of the APEC, has defined Quatremer as "the terrible enfant of the European Commission" and has described it as "a European journalist, but that does not lose his critical spirit with the way institutions of the European Union exercise the power ".