Article by Laura Foraster in the prestigious Public Diplomacy Magazine 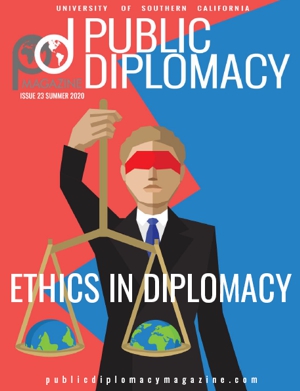 Public Diplomacy Magazine, published by the University of Southern California in the United States, is the world's leading publication in the field of public diplomacy. It appears twice a year and the 23rd issue of the magazine, which has just appeared, is dedicated to the subject of "Ethics in Diplomacy". One of the articles is signed by Laura Foraster, Secretary General of Diplocat, who applies the values ​​of Catalonia's human towers to the field of diplomacy and international relations.

In her article, entitled "35-Foot Human Towers and the Power of Trust: Lessons from Catalonia", Foraster explains the origin of this Catalan tradition and what makes it so unique. Based on the motto by Josep Anselm Clavé, "Strength, balance, courage and common sense", Foraster adds other values of human towers ​​such as collective effort, inclusiveness and trust, deeply rooted in Catalonia and which are also useful in public diplomacy, especially the latter.

Foraster concludes the article talking about Diplocat and the entity's commitment to project Catalonia to the world in all its diversity, demonstrating how a non-state organisation can do top-level public diplomacy in the service of the common good.

35-Foot Human Towers and the Power of Trust: Lessons from Catalonia