Education and sport, a winning combination to fight racism

How to use sport to combat racism was the central theme of the online conversation "Tackling systematic racism through sport" hosted today, 10 September, by the Catalan Government's Delegation to the United States of America in partnership with Diplocat. It featured Isidre Sala, the Catalan Government's Delegate to the USA; Ed Foster-Simeon, President and CEO of the US Soccer Foundation; Xavier O'Callaghan, FC Barcelona's Managing Director in the USA; former US soccer national team players Charlie Davies and Saskia Webber; and Carolina Ribalta, Director of Communications at AE Ramassà. It also included video messages recorded by Araceli Segarra and Ricky Rubio. The debate was moderated by journalist Aurora Masip.

Isidre Sala and Ed Foster-Simeon kicked off the discussion. Sala began by outlining the problem of racism in our society and argued that the time had come to take action. He also quoted Nelson Mandela and his statement "sport has the power to change the world" to underpin the theme of the conversation. In his opening remarks, Foster-Simeon said that this is a sad time but also a hopeful one as sport brings people together. He too quoted Mandela as saying that sport can be more effective than politics in combating social racism. Foster-Simeon ended by emphasising the power and positive influence that coaches for children and young people can have.

Xavier O'Callaghan said that Barça's "more than a club" slogan is also tied to values and set out the changes Barça has put in place lately to tackle inequalities. He gave as an example the professionalisation of women's sport in recent years and the more than 50 activities that the club's Foundation runs to help kids since integration can be accomplished through sport. In the USA, the Foundation only operates in New York where they have a programme in 16 schools in which they seek to integrate children in their communities and pool resources to create bonds among children from different backgrounds. FC Barcelona also provided a video of NBA player Ricky Rubio in which he set out his commitment to fighting racism.

Saskia Webber spoke about her experience of racism in sport. She said she had never experienced racism among players and coaches but has encountered it from fans or when she has been on the road. As for the new anti-racist movement in American sport, she believes that most athletes will not demonstrate or go on record to speak about what is happening so as not to draw attention to themselves and put their sporting careers at risk. She also said it is crucial that the debate is addressed in a comfortable and safe space where people can talk and ask questions openly about racism.

Carolina Ribalta from AE Ramassà spoke about the experience of the club, an NGO, and the roots of its social action. She explained that it all began when they had the chance to play against the Ethiopian League champions. The impact of the trip led them to start up a project for Catalan schools and businesses about how sport can change the world with the mission of giving all children the chance to play. They are currently the first football club to be a UNO ambassador and work with other clubs and schools in a number of countries. They are additionally working with UNHCR to set up a women's football team.

Catalan mountaineer Araceli Segarra, a member of Diplocat's Advisory Council, was also invited to share her views in a video. Segarra spoke about two main ideas. Firstly she pointed out that a mountain does not discriminate by gender or race and is the same for everyone. Then secondly she added that when you are in trouble, you do not care about who offers to help and we need to build this idea into our daily lives.

Finally, Charlie Davies took the floor and said that what got him hooked on football was the unity of the team, being part of a group, and also that sport brought him role models from different countries and cultures. He mentioned that he used to hide his experiences of racism because he had been brought up not to show vulnerability to this kind of behaviour. However, this year he has changed and has started to speak out. Davies said that sportsmen and women should be role models in speech and in action. He stressed that teams ought to do something and if a fan in a stadium utters racist insults, they should be thrown out, while if it's a big group, it's the team that should go. Finally, he noted that the battle against racism is not the only one and that homophobia and anti-Semitism also need to be countered.

Next there was a Q&A session in which the impact of the NBA strike on the Black Lives Matter movement was raised. Foster-Simeon replied that the players have a great platform and a lot of power and stressed that they no longer just shut up as they were expected to do but instead now they speak out and have the backing of the league to do so. Davies also added that the NBA came to a halt because it was the way to put pressure on big business to talk to politicians. They were able to stop it because they did it all together and this shows that power lies in unity. Davies concluded by saying that if the athlete, who is a leader and a hero, talks about these issues, this will raise awareness among their fans much more easily. Questions were also asked about the financial gap in football and Foster-Simeon and Webber stressed the resolve to give everyone the chance to play and join in because if there are no opportunities, there will be no change. When asked how to confront racism, Ribalta replied that everyone can do their bit and that the key is education from a young age, because as Webber said, you are not born a racist but rather you become one.

In wrapping up the discussion, Foster-Simeon also underscored the importance of children's education as it is the way to change the future and with any luck make racism disappear. He further noted how everyone in sport needs to understand and find the role they can play in changing things. Isidre Sala thanked the speakers and spectators for their participation and said that he was looking forward to future events sharing the same goal. 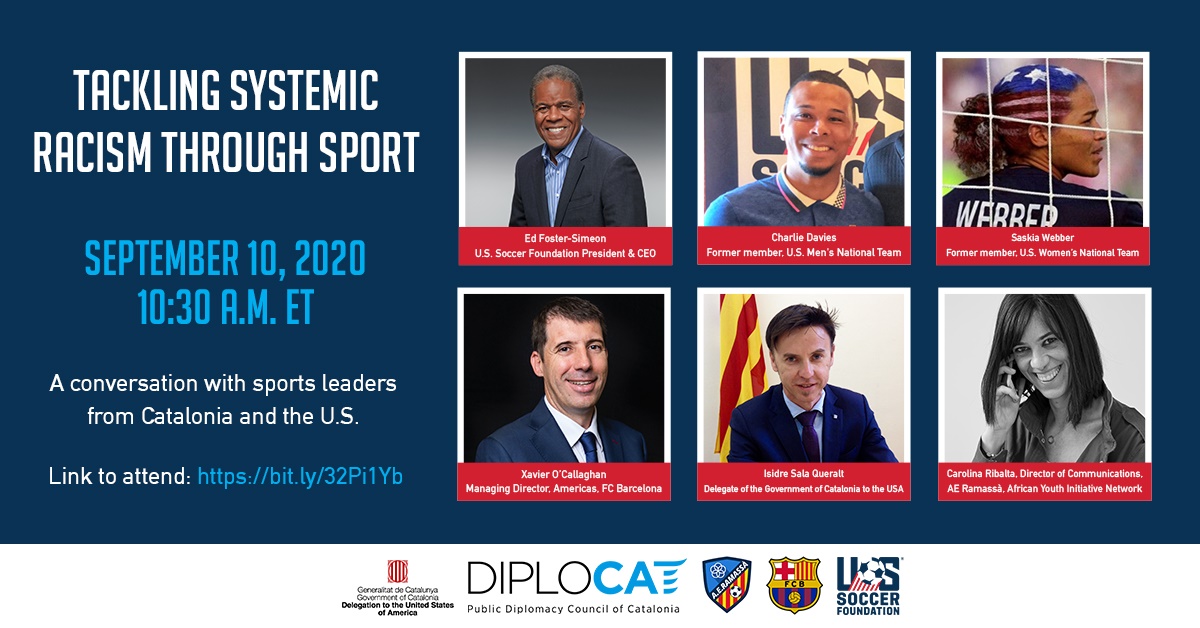