The Public Diplomacy Council of Catalonia (Diplocat) has hosted today, 8 September, the third Diplocat Digital Talk, New production models against COVID-19, as part of the series The world after COVID- 19; a decentralising vision. Its purpose was to examine the impact COVID-19 is having on many areas of our societies and kick off a discussion about the initiatives and new production models which are being put forward in Europe to meet the economic challenges posed by a pandemic world.

The event, which was held online in English, was organised in conjunction with the ministries of the Vice Presidency and Economy and Finance and Foreign Affairs, Institutional Relations and Transparency and included as speakers four experts in charge of designing policies to boost the economy in their respective European regions.

The event was moderated by Francesc Amat, a researcher from the Institutions and Political Economy Research Group (IPERG) at the University of Barcelona. Bernat Solé, the Catalan Minister of Foreign Action, Institutional Relations and Transparency, and Laura Foraster, the Secretary General of Diplocat, welcomed the participants. Minister Solé stressed the importance of working with a global perspective while bearing in mind that the public have to be at the core of policies. He also underscored the significance of cooperation and sharing good practices. Meanwhile, Foraster pointed out that regions have played a key role in dealing with the pandemic to date. She added that they will continue to do so when it comes to tackling the looming economic recession because they are often drivers of economic and tourism buoyancy.

The first speaker was Karin Scheiffele, Director for International Affairs at the regional government of Baden-Württemberg. She pointed out that the region's main industries, especially the car industry, need help to cope with the shift towards a more sustainable industrial model and so they are investing in digitalisation and artificial intelligence. She also mentioned the importance of Europe-wide cooperation to change the production model and regulate industry and also to ensure that Europe can demonstrate to other economies that it is possible to be industrially competitive with a sustainable production model. Finally, she argued that German federal coordination has been very effective in managing the first stage of the pandemic and suggested that it would be useful to extend this successful cooperation model across the EU and to all levels of decision making.

Agnès Rampal, Regional Councillor to the Provence-Alpes-Côte d'Azur South Region, pointed out that the crisis had brought to the fore previously existing economic challenges and weaknesses. She said that maritime transport companies, medium-sized enterprises and tourism in her region had all seen a sharp decline this year. Rampal summarised the measures they had put in place, citing in particular the "holiday voucher" designed to boost French tourism in the region. Rampal contended that the European recovery plan illustrates the importance of technological transition. Finally, she noted that the region has the skills for industrial outplacement and the capacity to drive ecological transition.

Helena Holmberg, Vice Chair of the Regional Development Committee in Västra Götaland in Sweden, said that exporting knowledge was the most important thing for her region. Here she noted the policy of close partnership between the regional government, universities and businesses. Since the economy is highly industrialised, they know that technology and artificial intelligence will lead to changes in the production structure and in particular impact the least skilled people. She also pointed out that the regions are not competing with each other but rather with the American and Chinese economies and said that in her view batteries are one of the industries with the greatest potential. Finally, she argued that now is the time to shift towards more sustainable industry and that this calls for increased funding for innovation, since once industry has gone it is not easy to get it back.

The last to speak was Natàlia Mas, Secretary of the Economy in the Regional Ministry of the Vice-Presidency and of the Economy and Finance, who noted that contrary to popular belief, the most specialised economies have the greatest problems in emerging from recessions and this means that specialisation and diversity have to be made compatible. She pointed out that after the 2008 crash it was already apparent that regions with a globalised economy were finding it easier to recover. She also talked about the many challenges involved in bolstering the Catalan economy and said we need to think about which projects can be funded locally and which might be eligible for European funding through inter-regional collaboration. Finally, she also outlined the need for coordination at all institutional levels and suggested that economic and health measures should be managed by the regions as this is the tier of government most familiar with its local area and the principle of subsidiarity should take precedence.

The event was rounded off by a Q&A where it was concluded that although there is no magic formula for finding a way out of the crisis, we need to maintain the consensus that it is not a choice between saving the economy and saving lives. All the speakers underscored the need to coordinate action between institutional tiers in order to remedy the coordination shortcomings seen in Europe up to now in handling all the issues raised by the pandemic. 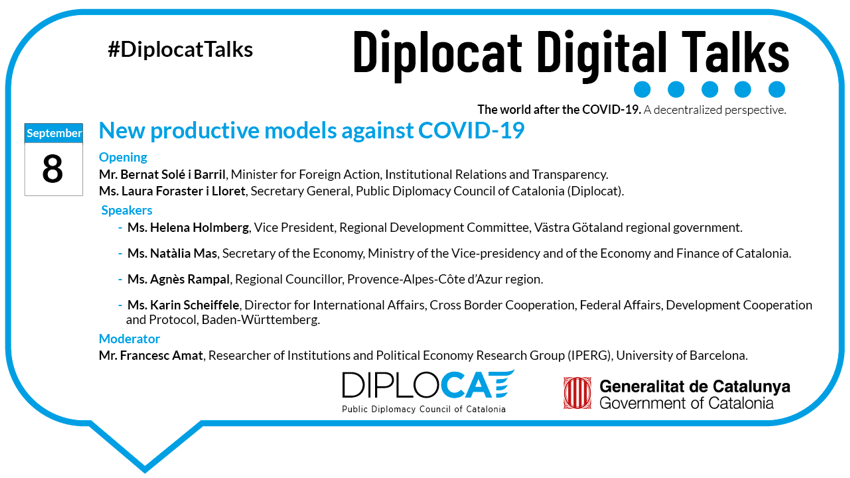