The Catalan commitment to transparency and open data 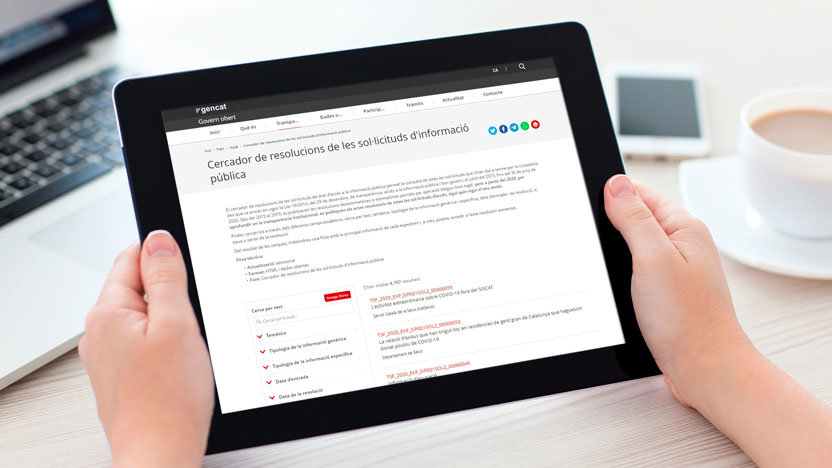 DIPLOCAT and the Secretariat for Transparency and Open Government in the Ministry of Foreign Action, Institutional Relations and Transparency have today held the first of three online events about good governance in local entities. The series is especially aimed at elected members and officials in local government and provides a theoretical and practical overview of the good governance and open government tools available in Catalonia. It also drills down into the resources which international organisations such as the Council of Europe and the OECD bring to local authorities for promoting innovation and transforming the public sector.

Video (in Catalan and Spanish):

In her welcome for the first session, entitled "Tools for good governance of local bodies: an international vision", the Secretary General of DIPLOCAT Laura Foraster said that "local government is one of the key pillars of the organisation" and that the series starting today comes under the specific Plan to internationalise Catalonia's municipalities. She added that "good governance is one of the topics of greatest interest at the municipal level which seeks to become more accessible to the public through transparency, accountability and participation." The attendees were also welcomed by Rosa Vestit, Director General of Local Government in the Catalan Government, and Bernat Solé, the Catalan Minister for Foreign Action, Institutional Relations and Transparency, who argued that open government is "an essential national tool" and acknowledged that providing reliable and open data and utmost transparency "is more essential than ever" in the current pandemic.

Roger Buch, the coordinator in Catalonia of the Network of Transparent Governments (Open Government Partnership - OGP) initiative run by the Secretariat for Transparency and Open Government, described it as "an association which encompasses more than 2,000 organisations and is founded on specific commitments that are made and renewed as part of world summits." Buch highlighted the recent "Open response & open recovery" campaign to share how Covid-19 is being fought in each country. Catalonia, which has been in the OGP since October 2020, has committed to work on five themes: public integrity and anti-corruption with an emphasis on citizen control; gender mainstreaming and women's rights; territorial governance and collaboration between administrations; setting up a participation ecosystem including activists and social movements; and promoting a system of governance anchored in open data.

This was followed by a panel discussion moderated by Núria Parlon, Mayor of Santa Coloma de Gramenet and representing the Network of Transparent Governments of Catalonia. It featured  Marga  Bonmatí, Director of the AOC Consortium, Javier Bikandi, Director of Citizen Services & Innovation and Improvement of Administration of the Basque Country Government, and Oliver Escobar, Senior Lecturer at the University of Edinburgh and Co-Director of What Works Scotland.

Marga Bonmatí spoke on behalf of the AOC, which is a member of the Network of Transparent Governments of Catalonia, and praised the 2014 Catalan Transparency Act which she described as "very ambitious, requires a lot of information to be published, often with limited resources, and calls for a paradigm shift by everyone." With this in mind, the AOC runs the Transparency Portal, a unique collaborative digital tool which is currently used by more than 900 local councils across Catalonia. Future challenges she discussed include ongoing outreach to the public using plain language and displaying information to suit their interests, automating updates to make work easier and linking with the open databases already available.

Javier Bikandi from the Basque Country spoke about its experience in the Open Government Partnership which it joined in 2018. The five commitments made by the Basques, all of them on a collaborative basis and in conjunction with local authorities, are as follows: public accountability; open and interconnected data; encouraging citizen engagement; driving forward an open schools project for the public; and a common framework of institutional integrity and ethics. Developments in these commitments are monitored through an open forum. A new action plan is to be brought out in April.

Finally, it was the turn of Oliver Escobar and Scotland. He said that in Scotland there is an organised civil society "which has helped to push the agenda of democratic renewal and public administration reform", often also coupled with advocacy for more political sovereignty. The Scottish government has responded with a number of initiatives and legislation and since 2016 has equally been a member of the Open Government Partnership. Escobar is involved in the 2014 What Works Scotland programme which has been instrumental in bringing participatory budgeting to more than 350 towns and cities. As for the challenges for the future, he stressed the reluctance there still is at many formal and informal levels as well as bureaucratic resistance when it comes to collaborative, participatory and horizontal projects.

Núria Parlon thanked the three speakers and summed up their contributions in a few brief conclusions. Firstly, that the processes which have been discussed today require time; they cannot be carried out overnight. Secondly, that these processes are crucial in order to enhance representative democracy and enable people to do more than just cast a vote in a ballot box every four years. And thirdly, there is a need for a change in political and especially organisational culture in order to put them into practice, something which calls for innovative technological tools that provide the public with quick and easy access to information and data.