The planet is sick and needs action now or never 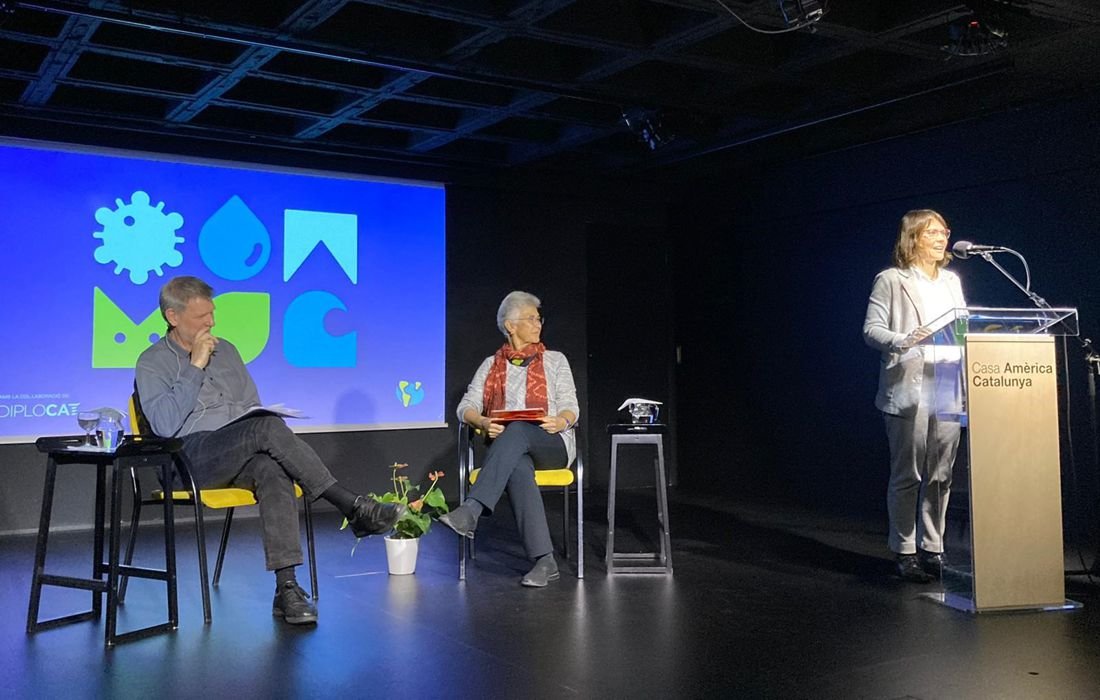 In collaboration with DIPLOCAT, the Casa Amèrica Catalunya has organised a series of seven talks with a woman's perspective on key issues for the preservation of the planet and our lives

A debate on sustainability has come to an end this evening in the series Scientists for the Environment, organised by Casa Amèrica Catalunya with the collaboration of DIPLOCAT. Through seven debates, leading scientists from Latin America have spoken to Catalan scientific influencers about major issues that will be the focus of scientific research for the preservation of the planet and our lives in the future, such as the pandemic, the climate, the seabed, water, forests, biodiversity and sustainability.

To say goodbye to this series, the director of Casa Amèrica Catalunya, Marta Nin, took the floor and, after thanking all the speakers for their participation, and DIPLOCAT for its collaboration, she emphasised the warning cry we are hearing from the scientists, raising awareness of the need to act "now or never" to reverse the wear and tear of the planet. The next speaker was the general secretary of DIPLOCAT, Laura Foraster i Lloret, who agreed that "the fight for our planet must be daily and not testimonial, and it is a problem that challenges us all."

Entitled Challenges for a Sustainable Future in Latin America, the seventh and final debate in the series was led by Yolanda Kakabadse, promoter of the Principles for Environmental Sustainability in Latin America, former director of the World Wide Fund for Nature (WWF) and former Minister of the Environment of Ecuador (1998), and David Bueno, director of the Chair of Neuroeducation at the Faculty of Biology at the University of Barcelona and renowned scientific disseminator.

The conversation began with Professor Bueno's question about whether the predominance of a male perspective in the field of science and its political application could be one of the reasons for the slowness in solving the problems of sustainability for the planet. Without going into the subject, Kakabadse recalled the impact caused by the anecdote of a friend of his, a leader of a pro-women's movement, who was at a congress and found it difficult to be heard in the noisy auditorium, so she banged on the table to make herself be heard, remembering that "women make up 50% of the population and are the mothers of the other 50%".

Kakabadse expressed her conviction that scientific knowledge must be used to make decisions in the field of politics, and stressed that the problem with the political response in the management of the Covid-19 pandemic has been precisely the lack of scientific knowledge on the subject. According to her, it is necessary to differentiate between pure science and applied science because the latter is what provides us with the knowledge necessary to make correct and effective decisions.

In this sense, Bueno wondered if, in the face of the environmental and social emergency facing the planet, science should help us to improve or maintain our quality of life. Kakabadse believes that what is needed is to restore rationality in the use of natural resources and balance in the production and consumption of goods. The Ecuadorian has been adamant in saying that returning to the situation in 2019, before the pandemic, is not an option because if we continue on this path, the planet will collapse. Bueno adhered to the statement by stating that, from a biological point of view, the human species is crossing the threshold of growth to become a pest. The Catalan biologist explained that there are studies that claim that the planet Earth would have the capacity to accommodate twice the current population, but obviously not with current levels of irrational consumption. 40% of food consumption goes to waste, while 800 million people go hungry, and this wasteful situation is no longer exclusive to North America and Europe, but Latin America has also entered this dynamic according to Kakabadse, adding a new problem to the many already plaguing the region.

As in other debates in the series, the speakers agreed that there is a lack of "interpreters of science" who help turn knowledge into useful information for the implementation of efficient public policies. They also agreed on the need to have knowledge of traditional culture to adapt these policies to the specific realities of each community, to avoid the cultural and social bias of science and the waste of public money on actions that do not take the local context into account.

Kakabadse made this final reflection: "The Covid-19 pandemic is the result of a sick planet, in part because of the misuse of its resources." She said that we reached this situation from a state of "normality" that many now want to recover, which would be a mistake. "I don't want to go back," she said. What we need is to restore nature so that it can regain its balance and to change the relationship between the environment and human beings.

At the end of the debate, one of the attendees asked the speakers about the need to better communicate the scientific message in order to make it clear to society at large. David Bueno pointed out that some progress has been made in this area, but gave the example of the University of Barcelona, where there are 2,000 researchers for 4 communicators. "The gap is still very large," he said.

The Scientists for the Environment has focused on Latin American scientists who are known for their perseverance and success in defending various areas of natural science research. These women have become references in their field. They have created bodies of work or made decisive scientific discoveries. They have been published in outstanding scientific publications and received international awards.

The cycle was also attended by Antonieta Rojas de Arias, president of the centennial Scientific Society of Paraguay (SCP); Ana Sofía Varela, a Mexican chemist who is researching the transformation of CO2 into non-polluting materials; Claudia Suseth-Romero, a Guatemalan inventor of a natural method of water decontamination; Verena Hauserman, former director of the Huinay Scientific Centre for the Study of the Seabed in Chilean Patagonia and Associate Researcher at the Pontifical Catholic University of Valparaíso; Tatiana Espinosa, Peruvian forest engineer, winner of the Jane Goodall Hope and Inspiration Ranger Award for her work in protecting the forest in the Peruvian Amazon; Brigitte Baptiste, creator of the concept of queer ecology, who provides a different perspective in describing and understanding the diversity and complexity of existing species; and the Catalan scientific disseminators Salvador Macip, Josep Maria Gili, Antonio Cerillo, Ramón Folch, Àlex Richter-Boix and Vladimir de Semir.