DIPLOCAT organises an event on the relationship between art and dialogue 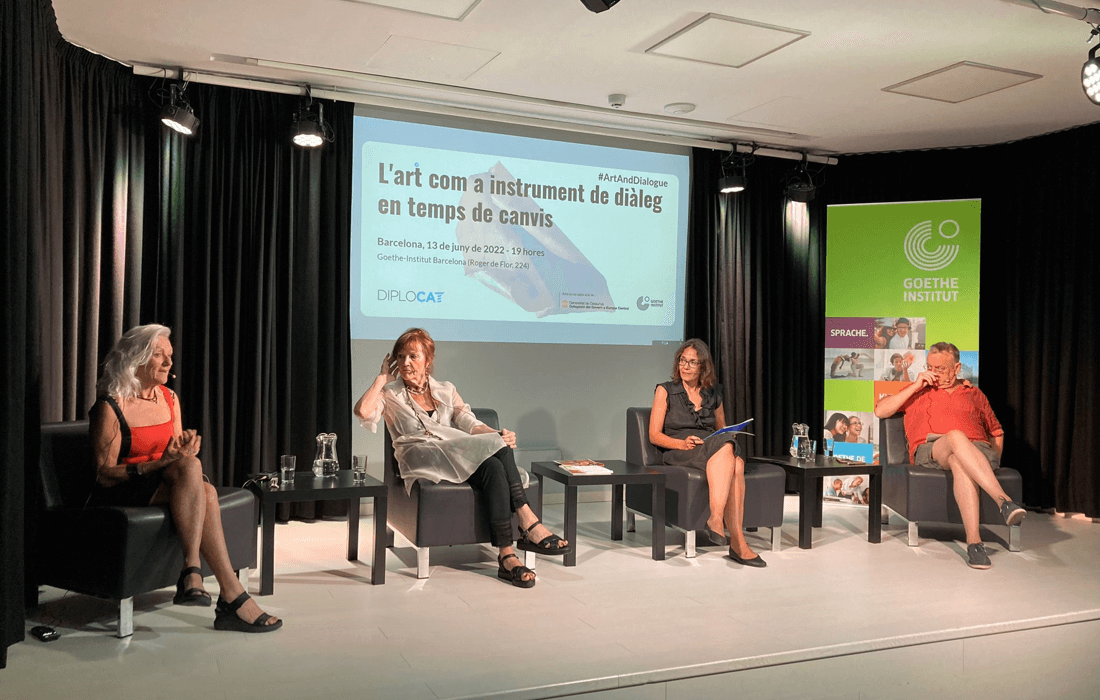 Yesterday, Monday, 13th June, an event was held on the relationship between art and dialogue at the Goethe-Institut in Barcelona, organised by DIPLOCAT in collaboration with the German Institute of Culture and the Government Delegation in Central Europe. The event was entitled "Art as an Instrument for Dialogue in Times of Change".

After a few words of welcome from Ursula Wahl, head of cultural activities at the Goethe-Institut Barcelona, and Krystyna Schreiber, delegate of the Government of Catalonia to Central Europe, there was a speech from Laura Foraster i Lloret, Secretary General of DIPLOCAT. Foraster welcomed this first collaboration with the Goethe-Institut in Barcelona and explained that, given that one of DIPLOCAT's objectives is to promote international dialogue, organising an event on art and dialogue is fully within the organisation's parameters.

A round table discussion followed, moderated by journalist Julia Macher, with artists Beate Winkler and Francesca Llopis, and art and literary critic Manel Guerrero, who also spoke on behalf of PEN Català. Julia Macher referred to a certain "apocalyptic atmosphere" in defining the present times, and Beate Winkler lowered her tone, but said that she had the feeling that "the old has gone and the new has not yet arrived." Winkler, born in the former East Germany and currently based in Vienna, is engaged in workshops and art projects with young people and stated that "today's young people do not rely on politics at all, and therefore they must offer us the new instruments of participation and art can be one of these instruments".

Francesca Llopis began by defining art as poetry, then spoke about some of the projects she has worked on in recent years and reflected on art as a tool for constructing national identities, referring to the specific case of Catalonia. Manel Guerrero also entered this debate and expressed his concern about the emergence of xenophobic identity discourses in the new post-covid era. "When people are afraid, they take refuge in their identities, whatever they may be," said Guerrero, who also spoke of the PEN Català's work defending and protecting persecuted writers.

The event aimed to reflect on new forms of cooperation to overcome divisive boundaries now that the world is facing very profound changes. Experts say that social crises must be seen as an opportunity to foster dialogue between different groups and social spheres and to focus on skills that can help them live together in peace in an increasingly diverse society. In a turbulent time, art is a key force in meeting new challenges and yet it is used too little.