The "Catalonia with Europe: 1982-2022" exhibition illustrates 40 years of Catalan presence in the EU 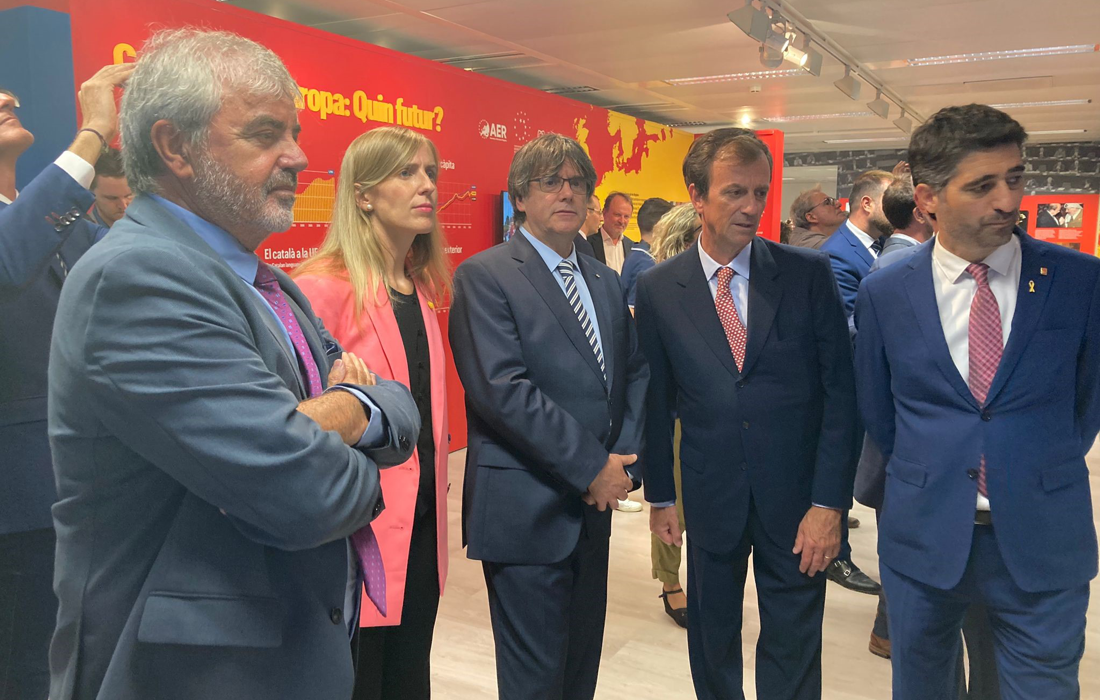 Yesterday, the Generalitat inaugurated the exhibition 'Catalonia with Europe 1982-2022' at the Espai Catalunya Europa in Brussels: to illustrate 40 years of Catalan presence in the European Union. The event, which took place as part of the celebration of the National Day of Catalonia in the European capital, was attended by the 130th president of the Generalitat, Carles Puigdemont; the vice president of the Government, Jordi Puigneró; the Minister of External Action and Open Government, Victòria Alsina; the Government delegate to the European Union, Gorka Knörr; and the curator of the exhibition, Casimir de Dalmau, among others. The Director of Press and Communication, Martí Estruch Axmacher, attended on behalf of DIPLOCAT.

The vice-president and councillor for Digital and Territorial Policies, Jordi Puigneró, recalled Catalonia's long pro-European tradition and said that "we must defend the EU's model of society and democracy". The minister for Foreign Action and Open Government, Victòria Alsina, defended by stating that the four decades of Catalan presence in Brussels "demonstrate the will of Catalan institutions and civil society to actively get involved in the European project and its main policies and debates". Finally, President Puigdemont remarked that "a more democratic and powerful Europe is needed, which ensures the survival of its historic nations, such as Catalonia".

The exhibition 'Catalonia with Europe: 1982-2022', organised by the Government of Catalonia, takes a tour through forty years of Catalan presence in Brussels. The story begins in 1982 with the creation of the Patronat Català Pro Europa, which is the embryo of both the Patronat Catalunya Món (2007) and DIPLOCAT (2012) as well as the current Government Delegation to the European Union, created in 2006 under the presidency of Pasqual Maragall. The exhibition is structured across six sections, explaining the steps taken from Catalonia to become a prominent actor in the so-called European bubble. The exhibition is curated by Casimir de Dalmau, who was a delegate in Brussels for the Patronat Català Pro Europa and later assumed leadership of the body in Barcelona. It is expected that the exhibition will be in Brussels until the beginning of next year.