The strength of sport as a tool for social inclusion 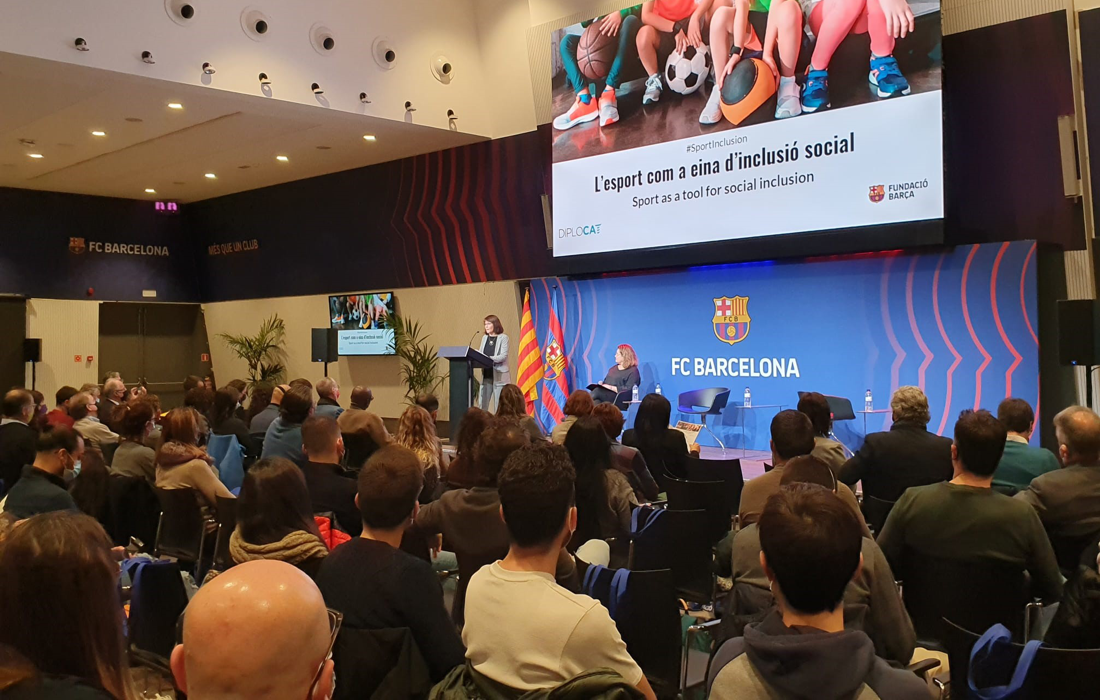 DIPLOCAT and the FC Barcelona Foundation have organised an international conference on the role of sport as a tool for social inclusion. About one hundred people attended the event, which took place in the Barça Auditori 1899. The day began with a few words from FC Barcelona Vice President Elena Fort, who expressed the organisation's commitment to continue being "more than a club" and going beyond strictly sport, getting involved with society and current world problems, such as hunger, human rights violations, racism and gender equality. Next, Laura Foraster i Lloret, General Secretary of DIPLOCAT, also welcomed attendees, emphasising the potential for sport as a transformative tool for building a more resilient and equitable world. Ms Foraster referred to DIPLOCAT's desire to promote the values of Catalan sport in the world and highlighted the key role that FC Barcelona and its Foundation play in the fight against racism and xenophobia and in favour of a more peaceful and inclusive world.

The opening remarks were given by Lilian Thuram, former French Barça player and creator of the Lilian Thuram Foundation for Education against Racism, who spoke with Rita Marzoa, journalist and moderator of the event, about education and racism in the context of sport. Thuram spoke about the political, economic and cultural roots of racism, and pointed to some avenues for a solution. These paths, however, are slow and complicated, because, according to Thuram, a real revolution of mentalities is needed in order to develop new sensibilities and adopt policies focused on solidarity, addressing, for example, the problem of the distribution of wealth.

This was followed by the first round table, attended by Philipp Müller-Wirth, Head of the Sports Section at the Department of Human and Social Sciences of UNESCO; Floor van Houdt, Head of the European Commission's Sports Unit (Erasmus+); Anna Caula, Secretary-General for Sport and Physical Activity of the Government of Catalonia; and Marta Segú, Director-General of the FC Barcelona Foundation. The speakers discussed the promotion of social inclusion and integration from public and private institutions, highlighting the idea that their key role is to provide tools to help achieve the objectives on the ground to not only allow the creation of laws and policies, but also promote the ability to build the idea of sport as an activity for everyone.

After a break, the second round table presented some good practices and successful experiences, with the expertise of Henry Gilham, Methodological Coordinator of the Inclusion Program of the FC Barcelona Foundation; Federica Minardo, educator of the Prospective Cooperative (Italy); Amina Moustafa, member of the board of Sport against Racism Ireland (Ireland); and Oriol Parés, sports technician at Brians 2 penitentiary.  All of them have agreed to highlight the pivotal role of sport as a tool to help us understand each other, beyond language, to impose some rules and create a feeling of community and union. Finally, in response to questions from the public, the panel discussed topics such as the importance of mental and emotional health related to sport, and how to overcome the idealism that surrounds the world of football.

The last speaker was the athlete Àlex Roca, ambassador for the FC Barcelona Foundation and an example of self-improvement through sport, since a cerebral palsy caused him a significant reduction in mobility. Through the use of sign language, with his wife acting as interpreter, Roca explained the meaning of his motto, "you set your limits", and defined sport as the tool for inclusion and the greatest vehicle for universal communication. He has also highlighted values promoted by sport, such as hard work, sacrifice, teamwork and perseverance.

During the closing, Elena Fort and Marta Segú once again took the stage to announce the club's collaboration with UNHCR over the next four seasons. For her part, the Minister of Foreign Action and Open Government, Victòria Alsina, recalled the importance of international agencies, administrations and sports entities in working to promote social inclusion. She also affirmed that sport is one of the best instruments to achieve the Sustainable Development Goals (SDGs) included in the United Nations 2030 Agenda: poverty eradication, health, quality education, economic growth, sustainability and peace.